May 07, 2012
Our first full day in FL was a great success. After dipping again on Smooth-billed Ani we headed north of Ft Lauderdale to easily score on nesting Spot-breasted Orioles, thanks entirely to Russ Titus. Of course we were thrilled when Russ texted us, while we were looking at the orioles, that he had just found a THICK-BILLED VIREO at Hugh Taylor Birch State Park, no more than 15 minutes away.

After nearly five hours of vigil things were looking bleak, until the bird appeared seemingly out of nowhere over my head. We all ended up enjoying some nice, albeit brief, views of the mega. Here is one photo. More to come, plus a voice recording, in a post when I get home. 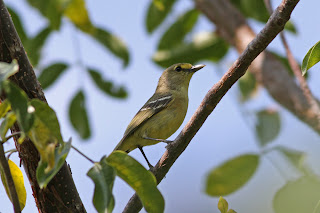 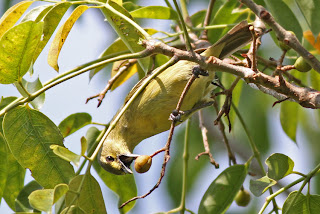 We followed it up with a couple of easy exotic ticks: White-winged Parakeet and Red-whiskered Bulbul.

Heading south tomorrow. A Bahama Mockingbird was reported from Key West today. If still there tomorrow, we'll make the drive all the way out.