While the typical hotspots such as Willard's Island, Meig's Point, and the Nature Center lot are birded quite often, there are a couple locations in the park that perhaps do not get the coverage they deserve. Two such spots come to mind, and they both are best in the fall and winter.

First, the campground. Specifically, the part of the campground outlined by the white path in the image below. Some of you know this area for the Western Tanager of two winters ago and the hybrid Baltimore x Bullock's Oriole from last month. In the fall and winter this part of the park is as good as any for passerines. The scattered cedars, pines, and shrubs provide shelter and food. It has particularly high potential for western vagrants I think.

The second spot is the 'old' rotary & vicinity. While a fair amount of the habitat there was just removed for construction of a new pavilion, enough should remain to harbor fall and winter passerines. This area held the state's first Lazuli Bunting a few winters ago. 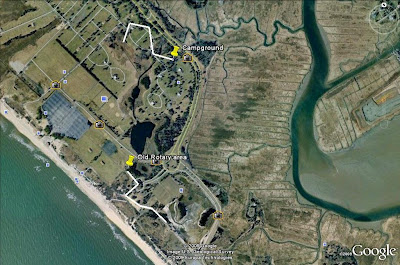 Two hotspots for passerines in fall and winter. (click to enlarge)
The beauty about Hammo is that any piece of habitat, no matter how small, can hold birds. I often wonder what's hiding among the coastal scrub and dunes I pass while driving along the park road.