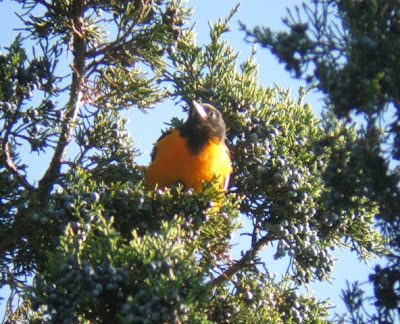 While birding Hammonasset State Park in Madison, CT back on 11/17 I located 2-3 Baltimore Orioles (or so I thought) including an adult male (actually found by Kim) and two apparent young birds. The birds weren't especially cooperative on this breezy afternoon, with the young birds being seen for only a couple seconds each. The adult male was seen for a couple of minutes hanging out at the tops of a pine and a cedar, but at the time I did not notice anything odd about the bird.

Fast forward to last Sunday 11/29 when I returned to Hammo. Again walking the campground for rare passerines I came across the orioles again in the same spot. I estimated at least 3, maybe 4 birds including the adult male once again. I got a quick look at one of the young birds that had a pale belly and what appeared to be a pale supercilium, which piqued my interest. Unfortunately I couldn't relocate the birds and decided to move on for the time being.

I soon ran into Mark Szantyr who was photographing (surprise) gulls in the West Beach lot. I mentioned the orioles to him and he was very interested in checking them out. We returned to the spot and relocated the adult male after 10-15 minutes of searching. This time the bird was about as cooperative as one could have hoped. It was just about eye level on the outer branches of a berry-filled cedar. Mark was able to capture some amazing photos. As he was clicking away I remarked how much white the bird had in its wing, to which Mark quickly replied with agreement, obvious that he was just thinking the same thing.

After several minutes of putting on a show, sometimes seeming oblivious to our presence, the adult male flew out of the cedar and into some nearby pines. We went in search of the other orioles and soon came across one of the apparent young birds...which was then followed by another, and another, and another. Before long we had tallied 6 (yes, SIX) Baltimore-type Orioles. On November 29th. In Connecticut.

That, by itself, had us very pleased. Our tally included seemingly an adult male, an adult female, and 4 young birds (two with pale bellies, two with orange bellies). I'd have to do more research on aging and sexing to confirm that breakdown though.

When Mark processed his images at home, he immediately went to researching the well-photographed adult male. After doing some thorough reading of the literature, he concluded that this bird showed several features of intergrade Baltimore x Bullock's from the known hybrid zone. His suspicions were confirmed by some of the leading oriole experts across the country.

I was finally able to delve into those articles last night and found the results fascinating. In his 1964 article, Charles Sibley devised an intergrade index, ranging in score from 0 (pure Baltimore) to 12 (pure Bullock's) based on certain phenotypic features including head, wing, and tail plumage. Sure enough our bird scores right around the middle of the index, indicating a pretty clear intergrade. In George Sutton's 1938 paper, he illustrates the spectrum of hybrids from mostly Baltimore to mostly Bullock's. The similarity of his illustrations to the Hammo bird is STRIKING and really worth checking out.

If you're interested in this sort of thing, check out those articles which are available free via SORA, and view Mark's photos. It's really cool stuff.