January 17, 2010
[UPDATE 1/21]
Refer to the comments below for updates to this bird, which appears to fall within the range of pure LBBG.

[UPDATE 1/19]
So far I have only heard from one experienced birder; he feels that the bird is most likely LBBGxHEGU and that GBBGxHEGU is pretty much out of the question. I'll post further updates if I hear anything else.

[ORIGINAL POST] A stop at the Pig Farm in Waterford, CT on my way east yesterday yielded a few hundred gulls, one of which was an interesting first cycle bird. The sighting was all too brief, but I was able to get a few photos and then observe the bird in flight.

A few dozen gulls were lined up on a large boulder, all facing me. The bird of interest caught my eye because of its coarsely marked underparts, unlike the uniform muddy brown underparts of your typical first cycle smithsonianus Herring Gull. A closer look revealed a bird the size of a medium-large American Herring Gull with longish legs. Its bill was rather stout and jet black with maybe a hint of paling at the base of the lower mandible, and it had a darker face mask and IMO a rather sloping forehead. 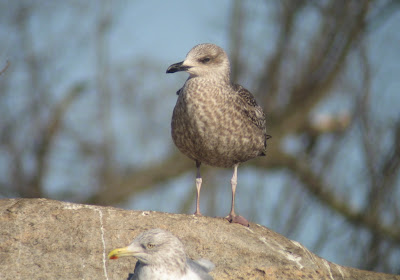 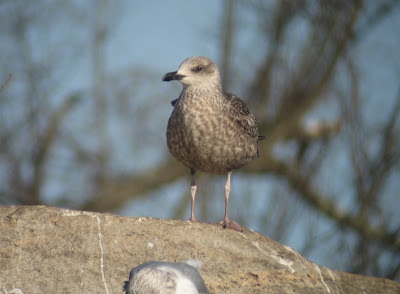 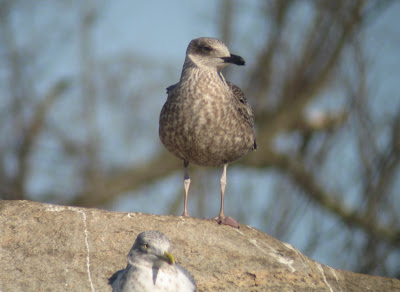 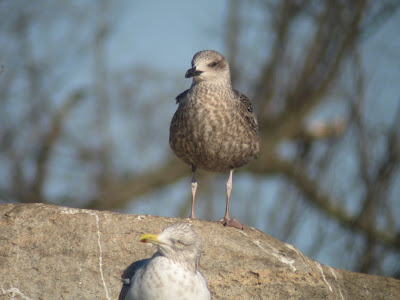 Puzzled, I tried to change my angle to get more of a profile view. At this point the pig feeding was over and the gulls were losing interest as they flew off one-by-one. Sure enough it took flight before I could change my angle very much. 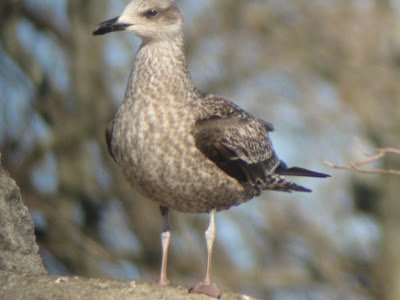 I snapped a couple quick digibin attempts but then focused on watching the bird in flight. In flight the following was notable:
- dark inner primaries, contrasting ever so slightly with the outer primaries (as in first cycle LBBG)
- dark bases to outer greater coverts (visible in the photo below but exaggerated there)
- very pale rump and uppertail, with broad dark tail band (within the broad range of smithsonianus but the tail was not entirely dark)

surprised I got the bird in frame! dark inner primaries and dark bases of outer greater coverts were easily visible in life, but they are slightly exaggerated in this photo

My views and photos were limited, but I think there's enough here to speculate on. My initial thought in the field defaulted to LBBGxHEGU(smith), supported by underparts intermediate in pattern between the two species, a jet black bill, dark inner primaries, long-legged look, and limited white at the tail base. But this was a good-sized bird with a stout black bill and sloping forehead, which actually recalled Great Black-backed Gull a bit, although on a hybrid GBBGxHEGU one would expect a paler inner primary window.

I'm not really sure what to make of it, and the lack of photos of definitive first cycle hybrids to compare does not help the matter.
If anyone has any thoughts, or if I am missing something obvious here, please comment!