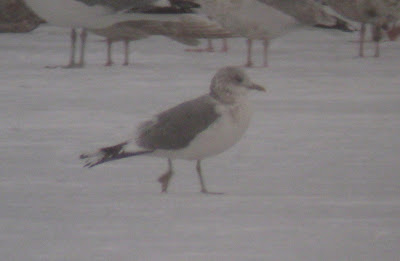 Yesterday afternoon James P. Smith and I headed northeast for a day's birding along the North Shore of Massachusetts. Our entire afternoon was spent at Niles Pond in East Gloucester, which is a freshwater pond right along the ocean shore that attracts awesome numbers of large gulls, especially when the pond is partially frozen. While the numbers at any one time are impressive enough, there is constant turnover with new birds coming from the ocean and old birds filtering towards the harbor after a bathe and a rest at the pond. It's quite a sight.

I'll spare the narrative and other highlights (incl THAYER'S) for a later post, but long story short our best bird of the day was one of the last. An adult MEW GULL appeared out of nowhere on the ice among the throngs of large gulls very late in the afternoon.

Apologies for the poor images, for which we'll blame the fading light, snow showers, and wind :) All photos are digiscoped and entirely unaltered (except for cropping). 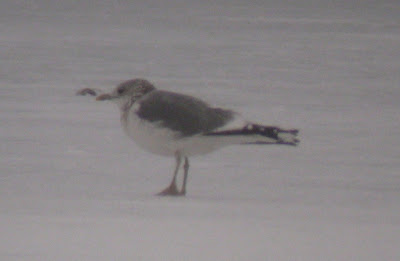 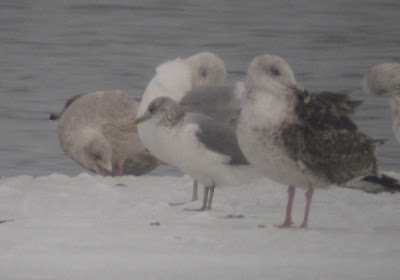 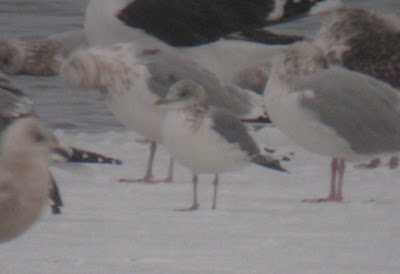 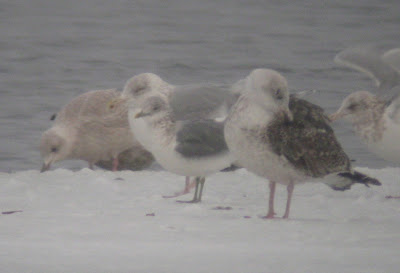 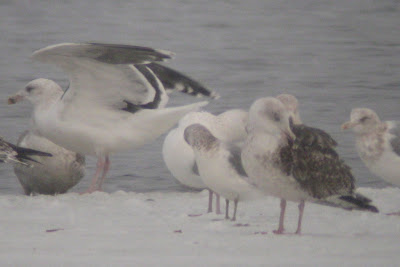 I'm not really sure which form this is, honestly. Not looking right for "Common" Gull, we considered other (both North American and Asian) subspecies in the field. ID complicated by the possibility that this is the same bird seen in the area a month and a half ago. Please leave a comment below with any thoughts/impressions. Please check out James' photos too, which show a hint of the upperwing pattern and one shot behind a Ring-billed Gull.

Expect updates on this bird in the near future.

QUICK UPDATE: The general consensus is that this bird likely belongs to either heinei or kamschatkensis of Asia, with the assumption that this individual was seen multiple times over the course of a couple years along the North Shore. See the MARC Report for details.