January 21, 2010
As mentioned in the prior MEW GULL post, James P. Smith and I teamed up for a day on the North Shore, culminating with an afternoon of gulling at Niles Pond in East Gloucester. After not too long we located a classic juvenile THAYER'S GULL on the darker end of the spectrum.

Your typical scope view of the gulls at Niles Pond. An arrow points to the Thayer's. 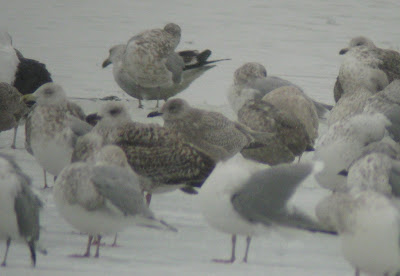 Darkish mask, dark bill with paling at the base. A hint here of the silvery-white underside of the primaries. 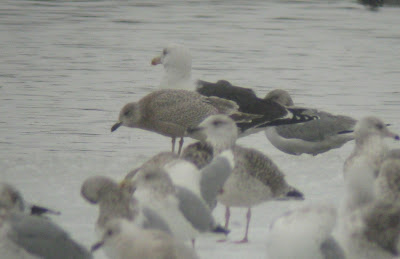 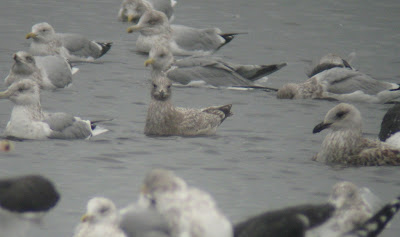 Though we didn't capture any open-wing shots, the bird had a classic Thayer's wing pattern above and below: "Venetian blind" effect on the outer primaries from above, and a silvery-white underside of the flight feathers with thin dark edges to outer primary tips as in this photo by Jeff Poklen. All scapulars appeared to be juvenile feathers. All in all, a rather straightforward Thayer's Gull (if such a thing exists).