August 15, 2010
Today was a day with as much driving as birding, but this was thanks to us being ahead of schedule. We had enough time to work in extra stops as we worked our way west back towards Tucson. The last two days would be focused on cleaning up what we've missed so far.

We approached the Chiris from the west side today, heading up via Pinery Canyon Road on a B-line for Barfoot and Rustler. Here our targets would be Olive Warbler and Short-tailed Hawk. At 0630, Between Onion Saddle and Barfoot Junction we pulled over to investigate a soaring raptor. There was an adult SHORT-TAILED HAWK kiting in the breeze. Our attention turned to some calling nuthatches, and we soon heard an Olive Warbler's call note among them. Sure enough, there was one OLIVE WARBLER along the road. The mixed flock began to build in the coniferous canopy down-slope, so many birds were at or below eye-level. A nice surprise was a HERMIT WARBLER, a life bird for three of us. Yet another RED-FACED WARBLER was great (can't get enough of those). GRACE'S WARBLER, a second OLIVE WARBLER, and more MEXICAN CHICKADEES made themselves known.

Then an owl gave a series of hoots from down the darkened slope at 0635. Flam! The FLAMMULATED OWL went on to give a few more series of calls before shutting up. We started to make a trek down the hillside, but the owl went silent and we figured it would be a needle in a haystack.

In a crazy five-minute period we had both our targets plus two big surprises and other goodies. At this point we had no reason to stay in the Chiricahuas, so we decided to take a shot in the dark at our missing thrashers. We departed for the Sulphur Springs Valley, specifically the Whitewater Draw area.

Lee and Coffman Roads hold Bendire's and Crissal Thrasher, but it was already uncomfortably hot by the time we arrived. Still, it was worth a shot since we had the time. Our only thrasher was yet another CURVE-BILLED, but LARK BUNTING was a nice surprise. Glenn finally got a nice look at SCALED QUAIL, and a ROADRUNNER was cooperative here. one of the many Western Kingbirds dotting the wires
We were so close to Whitewater Draw itself that we had to stop in. LARK SPARROWS were around the parking lot, and LAZULI BUNTINGS were abundant. The water was quiet, best birds being 3 REDHEAD and a flyby Plegadis ibis. 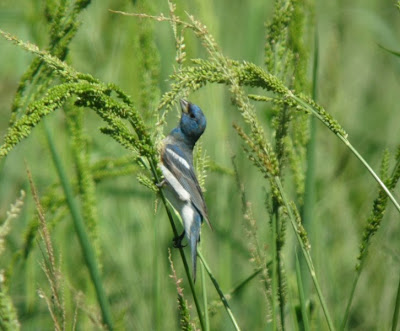 Lazuli Bunting
We continued NW from here, stopping at the San Pedro House to look for a single Green Kingfisher that had been sporadically seen. No luck with that, but again, we had the time so it was worth a check. 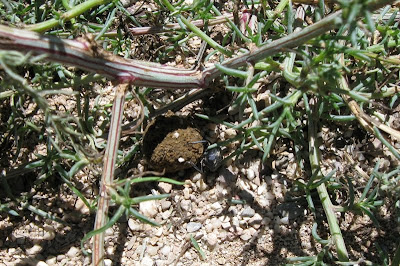 you guessed it! Dung Beetle (or is it Frank Stallone?)
The Huachucas deserved another stop, particularly for hummingbirds. Ramsey Canyon held a VIOLET-CROWNED HUMMER but not much else. It was then back to the Beatty's at Miller Canyon, where a WHITE-EARED HUMMINGBIRD was a constant presence with the usual suspects. We relaxed here for a while, which allowed me to take a bunch of photos. 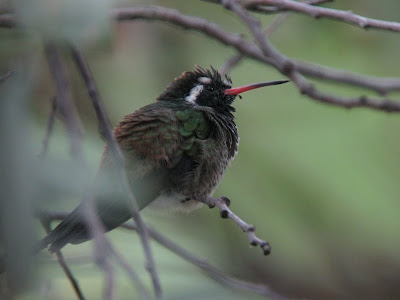 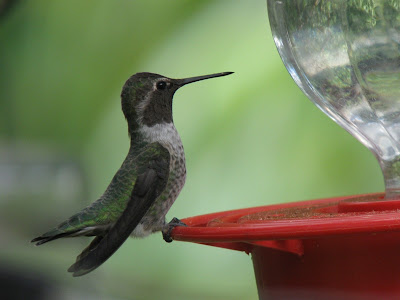 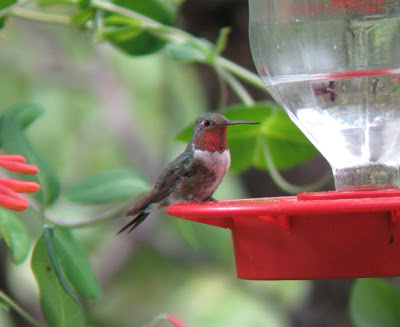 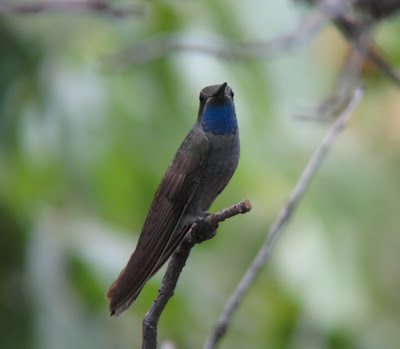 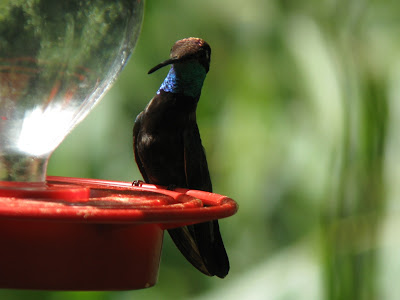 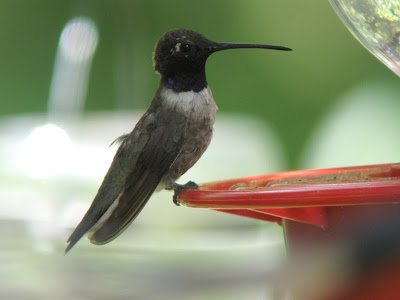 Black-chinned Hummingbird
It was mid-afternoon at this point, and we were ultimately headed to Tucson for the night. We still needed one desert bird in Tucson, Gilded Flicker, which Glenn still needed a look at. I figured we'd head to saguaro desert on the west side of Tucson where I had the species back in February. We pulled onto a side road, stepped out of the car, and immediately flushed a GILDED FLICKER. It teed-up atop a cactus, allowing for scope views.

We still had some time before sunset, so we went to the nearby Shannon-Broadway intersection which has some very productive desert habitat despite being surrounded on all sides by residential neighborhood. Here we had a handful of COSTA'S HUMMINGBIRDS including a great look at a singing adult male.

After dinner we had a few LESSER NIGHTHAWKS under the streetlights.