COA Shorebird & Tern Workshop (and beyond)

August 23, 2010
Sunday's COA Shorebird & Tern Workshop got off to a great start when Frank Mantlik spotted a HUDSONIAN GODWIT as it flew into the lagoon at Sandy Point in West Haven. Most, if not all participants got decent scope views of this adult bird before it was flushed by the incoming tide. After a lengthy flight around the harbor, the bird re-settled onto the outermost sand bar where it remained until we left after 9am. Although we can't know for sure, this godwit was likely a product of the morning's inclement weather and east winds...the best weather pattern for finding Hudwits in CT. 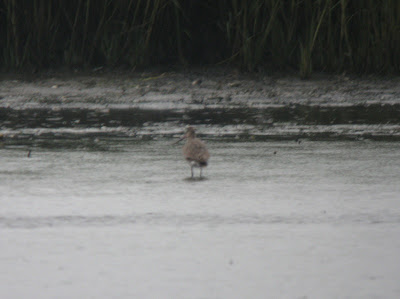 poor record shot of the godwit...low light, wind, and rain made for tough digiscoping conditions
Other Sandy Pt highlights included a few Clapper Rails and an immature SORA for the earliest birders. The remaining shorebirds were common species, and the only terns about were a couple dozen Commons.

We moved on to Milford Point for high tide, where numbers and diversity were certainly strong enough to keep us entertained for a while. The first thing we noted upon arrival was the presence of a flock of 41 Lesser Yellowlegs on the sandbar, an unusually high count for this species, especially on the Milford Pt sandbars (they tend to prefer marshes and muddy pools). Hidden in this flock were 4 STILT SANDPIPERS. We can thank the weather again for this one. Lesser 'legs and Stilt Sandpipers are often grounded together by late August rains (particularly the last 10 days of the month, it seems).

A flock of 19 juvenile Willets, also quite high for the date and location, on the same sandbar was composed of 4 "WESTERN" and 15 "Eastern" Willets. Participants were treated to side-by-side
comparisons of these two subspecies. More common shorebirds carpeted the shrinking sandbar as the time came in.

Terns were constantly coming and going from the sandbars, and several feeding flocks were diving around the mouth of the river. Two immature FORSTER'S TERNS were cooperative, and Frank Mantlik picked out a single BLACK TERN as it was foraging closer to the Stratford side of
the river mouth.

In all, during the "official" workshop, 14 shorebird species and 4 tern species were seen. Other participants may have more to add. 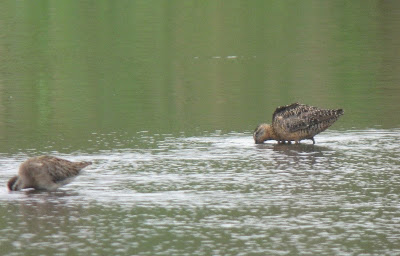 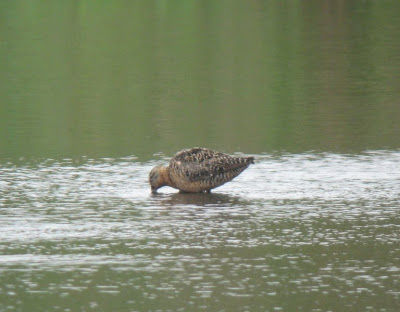 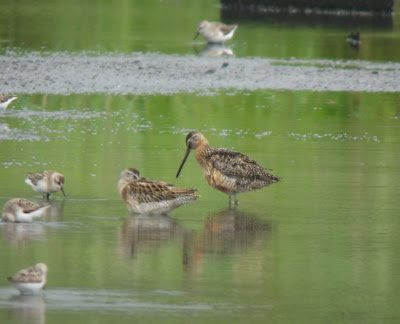 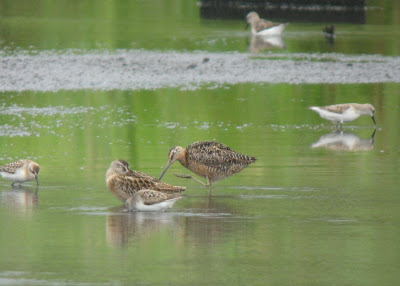 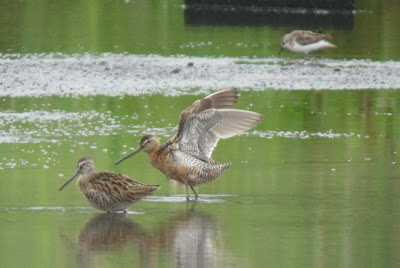 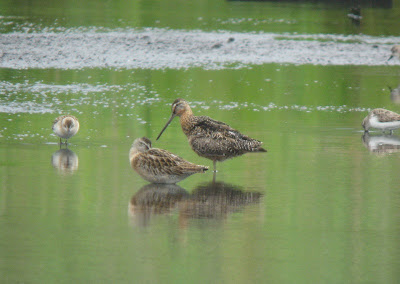 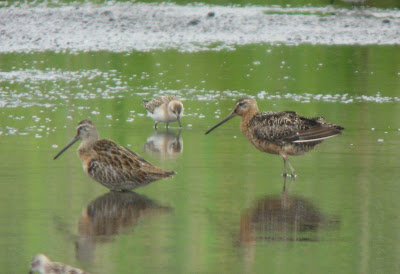 adult Long-billed Dowitcher at the Access Road pools in Stratford
The mudflats at the end of Oak Bluffs Ave, just outside the Long Beach entrance, held another (or part of the same?) flock of Lesser Yellowlegs and Stilt Sandpipers. There were well over 50 LEYE in this flock, and there were again 4 STILT SANDPIPERS (2 ad, 2 juv). Two more Pectoral Sandpipers here (1 ad, 1 juv). 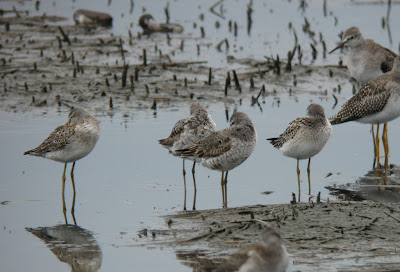 4 Stilt Sandpipers, Stratford
On my way home I stopped at Mackenzie Reservoir in Wallingford which has again been drawn down for the summer. The mudflats are extensive right now, and there is a large area of grass and weeds growing in that may be appealing to the grasspipers. This spot deserves frequent checks over the next few weeks and could pull in a Baird's or Buff-breast if lucky. I saw:

In all I observed 18 species of shorebird today, which is about what you can expect at this time of year over several hours in different habitats. Today was more about quality, with the godwit, LB Dows, and several Stilt Sands being the highlights. Several possible species were missed. For example, we missed White-rump, Western Sandpiper, Piping Plover (most, if not all, have departed), Whimbrel, Knot, Golden-Plover.