August 12, 2010
We started the day in the Huachucas by spending the entire morning at Carr Canyon. Most of today's targets were birds of high elevation, so we spent the bulk of our time up there. On the way up, however, we still had some nice birds. The two big ones were DUSKY-CAPPED FLYCATCHER, which had eluded us to that point, and our first VIRGINIA'S WARBLER. 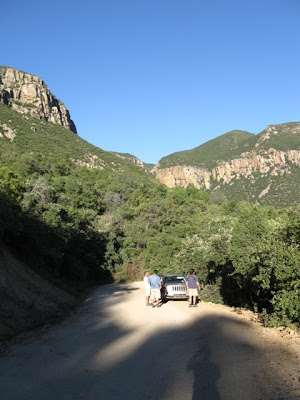 On our way into Carr Canyon
Towards the top we enjoyed WHITE-THROATED SWIFTS, BUFF-BREASTED FLYCATCHERS, PLUMBEOUS VIREOS, HUTTON'S VIREOS, two more VIRGINIA'S WARBLERS, many BLACK-THROATED GRAY WARBLERS, GRACE'S WARBLERS, PAINTED REDSTARTS, and a pair of HEPATIC TANAGERS. A NORTHERN PYGMY-OWL gave a couple series of hoots in response to our tooting.

At this point we looked at our list of remaining target birds and realized that there was no good reason to stay in the Huachucas, so we headed northeast toward the town of Willcox and the Chiricahua Mountains.

We arrived at Willcox during early afternoon and headed straight for the Willcox Twin Lakes, a known shorebird hotspot. Here we had a BAIRD'S SANDPIPER, 4 STILT SANDPIPERS, 25 LONG-BILLED DOWITCHERS, and 50+ WILSON'S PHALAROPES.

At this point we had yet to feel a drop of rain on this trip, but we could see that was about to change. The Chiricahuas to the east were covered in storm clouds. 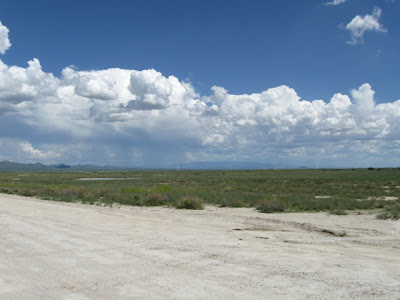 Cloudy over the Chiricahuas 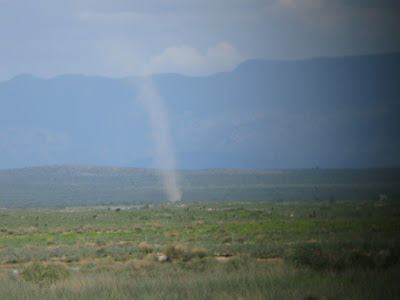 dust devils were swirling in the distance
Despite that, we decided to head to the mountains in hopes of getting lucky with the weather. Upon arrival to Pinery Canyon Road we realized that the weather was about to take a turn for the worse. 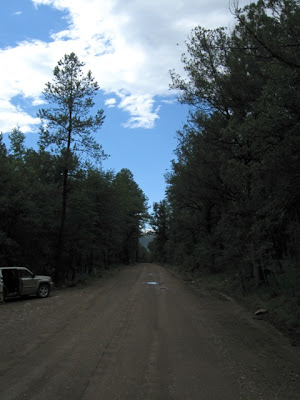 looks beautiful in one direction... 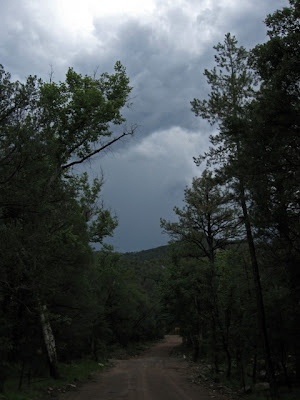 ...and ugly in the other direction
We were chased out by downpours and headed back to Willcox for the night. On the drive back, we were treated to this: 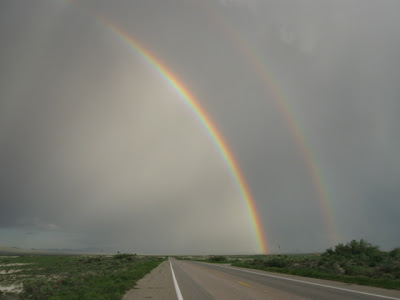 Double ****ing Rainbow!!! Not quite all the way across the sky...
Another stop at the Willcox Twin Lakes was more productive, perhaps thanks to the inclement weather. We had AVOCETS, BLACK-NECKED STILTS, a juv SEMIPALMATED SANDPIPER, and 11 WHITE-FACED IBIS. On the smaller, marshy pond we had RUDDY-DUCK, PIED-BILLED GREBE, and a YELLOW-HEADED BLACKBIRD. 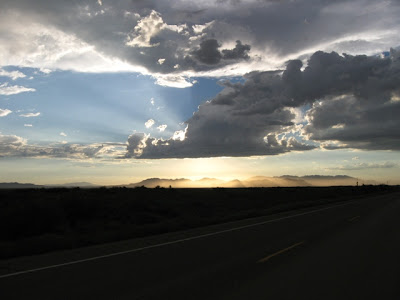 And apparently I went the entire day without taking a single bird photo...