March 02, 2010
On the morning of Day 3 it was time to depart San Diego and begin the journey eastward along Interstate 8. I arrived at the Pacific Crest Trail at dawn. 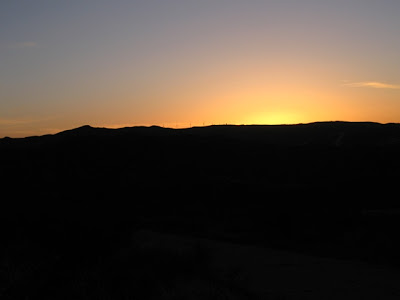 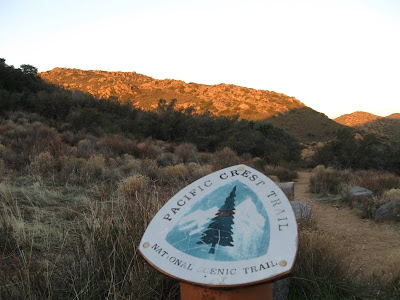 The SoCal book mentioned that this was a decent location for "Bell's" Sage Sparrow and typical chaparral fare. Not a hint of a Sage Sparrow anywhere, but I had my first RUFOUS-CROWNED SPARROW singing from the hillside. As the morning light hit the hillside, birds began to sing in earnest. Everything was in fantastic light. Here I enjoyed scope views of WESTERN SCRUB-JAY, SPOTTED TOWHEE, and CANYON WREN among others. 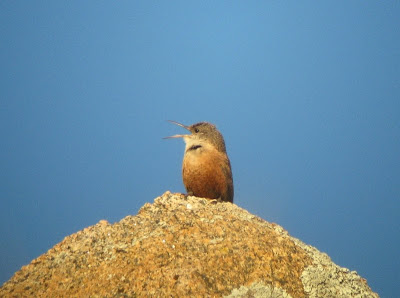 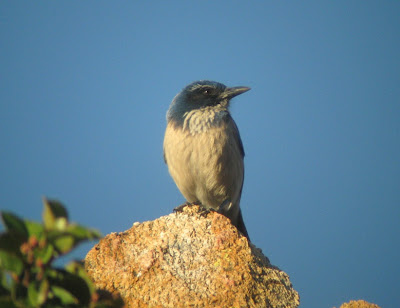 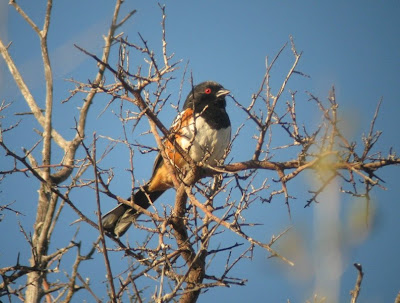 Spotted Towhee
After I had my fill of these birds it was time to head up the Sunrise Highway and find a new set of plant and animal species. As I gained height, the habitat changed from chaparral to open meadow to pine woodland. The open meadow wasn't terribly birdy but held a couple thrushes: WESTERN BLUEBIRD and AMERICAN ROBIN. 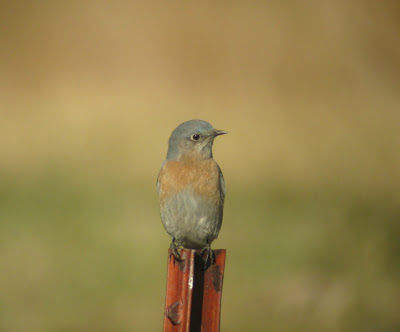 female Western Bluebird
The pines higher up held a bunch of stellar birds. My only lifer was OAK TITMOUSE, but ACORN WOODPECKERS, STELLER'S JAYS, MOUNTAIN CHICKADEES, PYGMY NUTHATCHES, and "OREGON" JUNCOS put on a fine show. 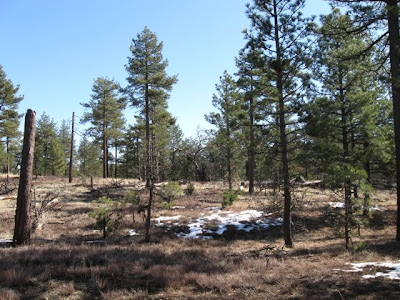 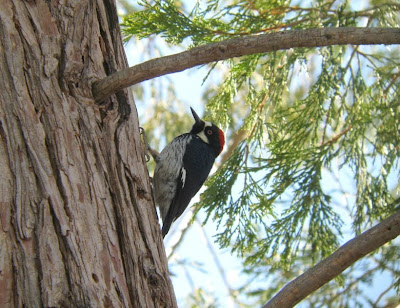 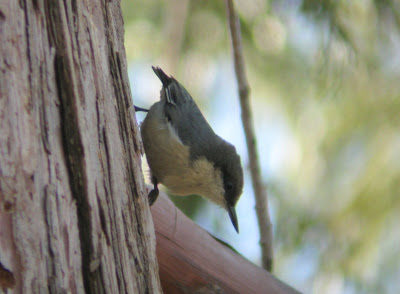 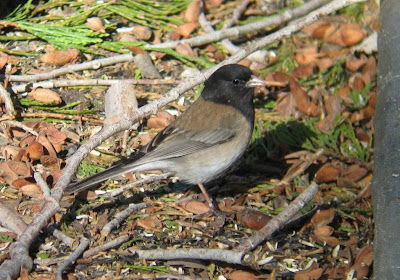 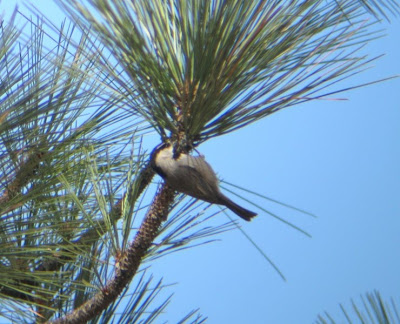 Mountain Chickadee
At this point I had a decision to make. I was about a half-day behind schedule so I checked my notes and decided to skip the Anza-Borrego Desert because there wasn't much there I couldn't see at other stops along my route. So, from the Laguna Mtns I had a bit of a drive ahead of me as I pushed eastward. My next stop was the Salton Sea, or, more accurately, the towns and agricultural fields to the south and southeast of the sea. 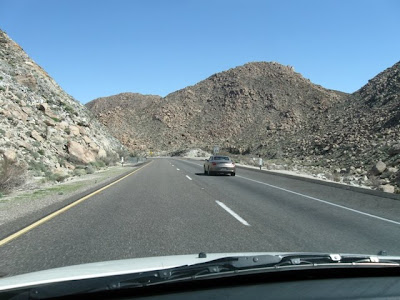 typical view while driving from the Laguna Mtns toward the low altitudes of the Salton Sea
I arrived at Sunbeam Lake in El Centro in the heat of the early afternoon. Two individual geese were wintering here: an "ALEUTIAN" CACKLING GOOSE and a GREATER WHITE-FRONTED GOOSE. The Aleut was my target here as this would be a new subspecies for me and would complete the Cackling Goose grand slam (had seen the other 3 ssp already). The geese were right where they were supposed to be and I almost got them to come in for some bread. 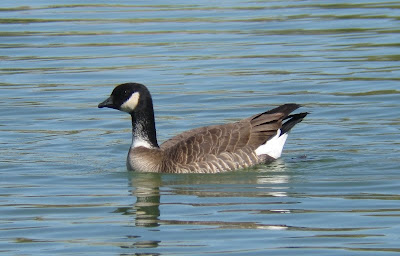 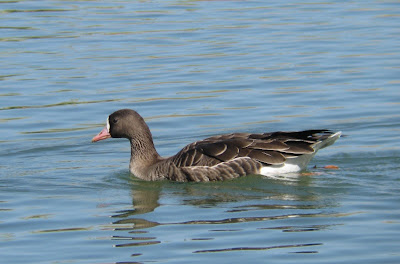 Greater White-fronted Goose (note the plain pink bill on this bird, unlike most orange-billed Greenland GWFG that typically appear in New England)
Next it was onto Brawley, where a ZONE-TAILED HAWK had been wintering. As I was about to turn onto the road leading into the hawk's favorite park, I glanced up to see a Turkey Vulture-like bird soaring over the intersection. I pulled onto the shoulder, hopped out, and sure enough it was the Zone-tail. At this point I was feeling really good and in the midst of a very efficient day.

My late afternoon target would be Mountain Plover. I had several places to check and knew I would see other birds of interest while looking for the plovers. In Calipatria, at the intersection of Blair Rd and Lindsey Rd, there was a flock of ~60 MOUNTAIN PLOVERS showing very well. At this point in the afternoon the heat haze wasn't much of a problem so I stood around for a while and really enjoyed these birds. Before I found the plovers I came across a few goodies: WHITE-TAILED KITE, MOUNTAIN BLUEBIRDS, and flocks of egrets and curlews in the hundreds. 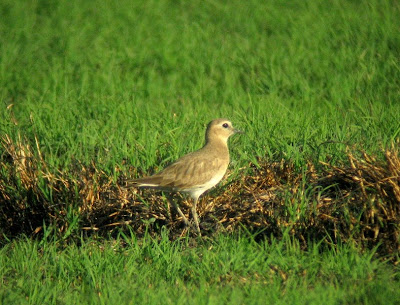 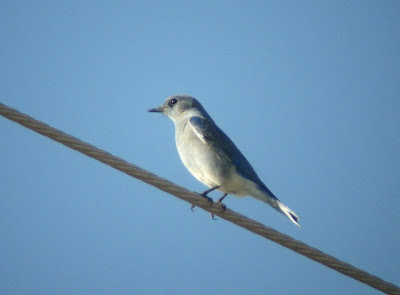 Mountain Bluebird
While driving the fields south of the Sea I saw some things that reminded me I wasn't in southern New England anymore... 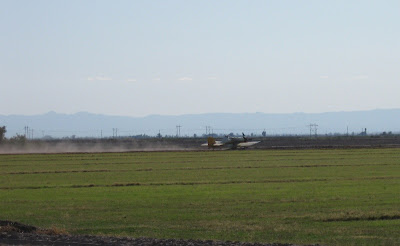 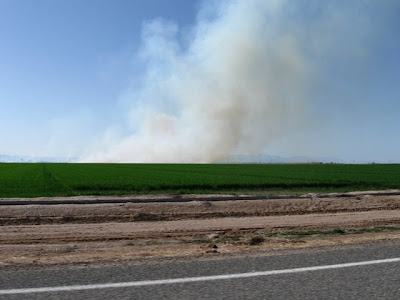 Burning farm field...may be burned to prepare the field for future planting, to rid the land of weeds, or to condition the plants themelves.
Sunset was approaching and I wanted to take a stab at "YUMA" CLAPPER RAIL so I decided to spend dusk at the Wister Unit along the SE shore of the Salton Sea. This part of the wildlife refuge is comprised of several impoundments from which one can observe pools and marshes that harbor large numbers of waterfowl. I gravitated toward one particular block of marsh in hopes of seeing a rail. After a few minutes one Clapper began to call, which in turn triggered a couple more to get going. Soon the marsh was alive with song. One Clapper called from what had to be no more than 5 feet away from me, but it refused to show itself. Other birds calling were LEAST BITTERN, SORA, MOORHEN, COOT, and many MARSH WRENS. A very cooperative BLACK-TAILED GNATCATCHER distracted me from the wetlands for a few moments and even allowed a few digiscoped shots. 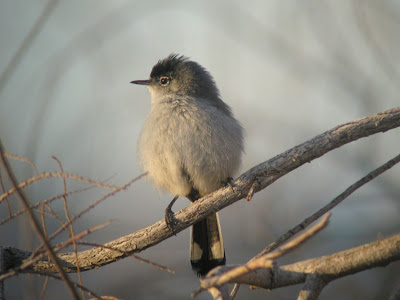 Black-tailed Gnatcatcher showing off its undertail 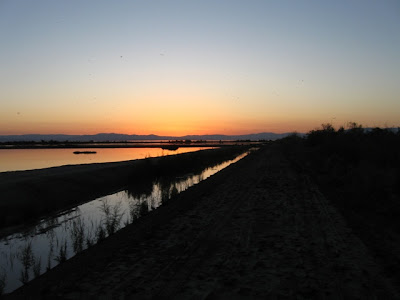 sunset at the Wister Unit