Today's itinerary began with a few hours at Patagonia Lake State Park, a location that held several wintering passerines I was after. I was the first birder on the trail, which didn't really do much for me because bird activity didn't increase until the sun warmed things up. Still, a PLUMBEOUS VIREO was a nice catch, and I studied a couple GRAY FLYCATCHERS that were hanging out along the main trail. Their "whit" call notes and tail wagging were fairly constant. 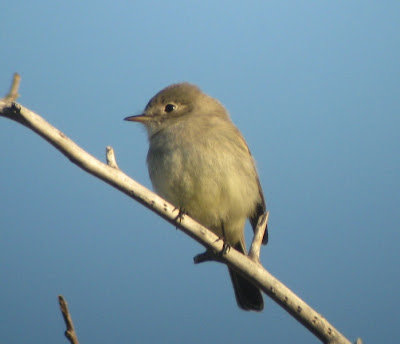 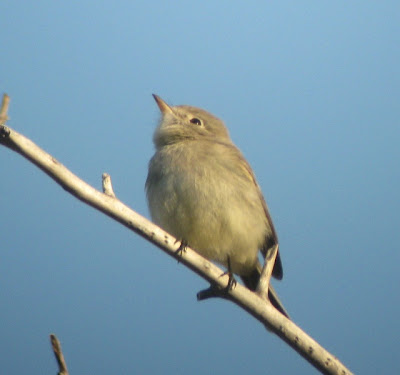 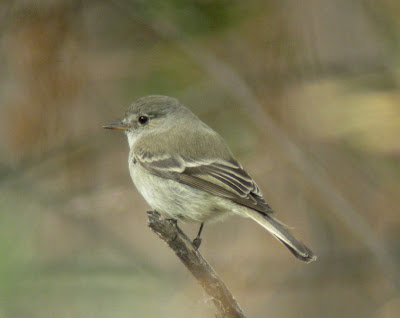 Gray Fly #2
After a while I ran into a couple birders who had just seen the wintering male ELEGANT TROGON further up the trail. I headed straight there along with a local birding couple. It wasn't long before we spotted the trogon perched on a log just off the ground no more than 10 feet from us! Even though the bird appeared oblivious to us, we backed off and enjoyed crippling views of this stunning bird as it foraged in the understory. The photos do not do it justice. 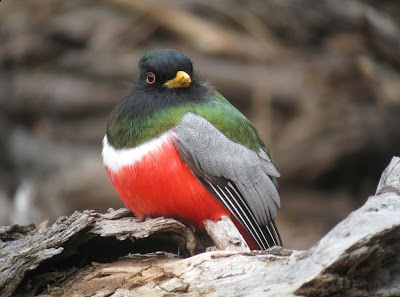 (click to zoom and check out the plumage details...stunning) 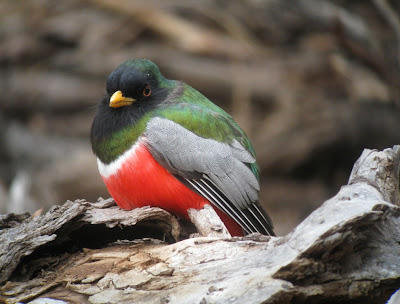 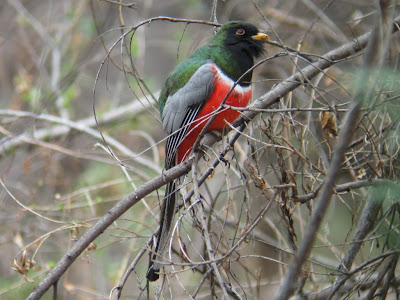 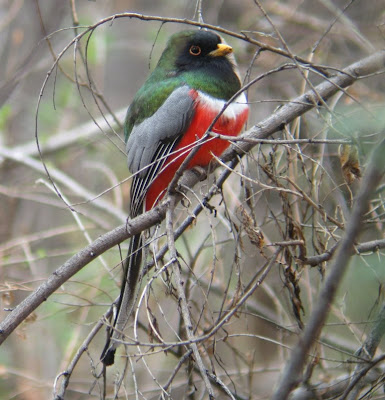 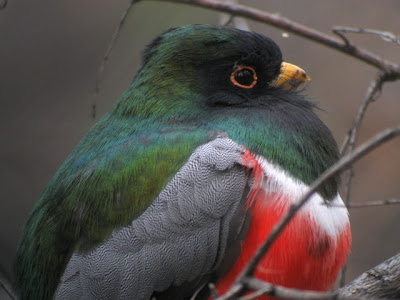 Elegant Trogon...best looking bird of the trip
I eventually tore myself away from the trogon to join a few birders who were onto something else. Turns out they were keyed into a couple of the park's other wintering celebrities: PAINTED REDSTART and HEPATIC TANAGER. 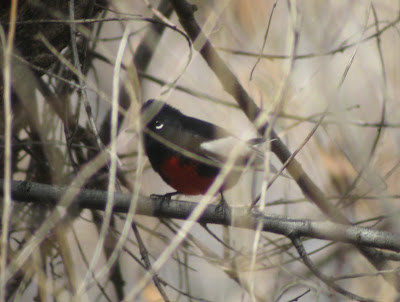 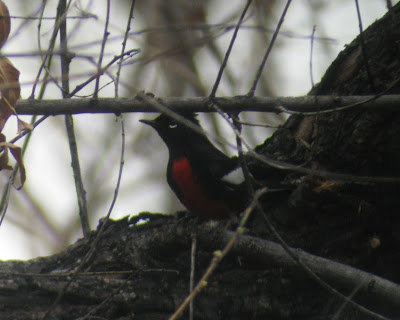 Painted Redstart
At this point I had just about cleaned up on my target birds, but stopped to enjoy some nice birds on the way out, such as NEOTROPIC CORMORANT and my best looks at SAY'S PHOEBE. 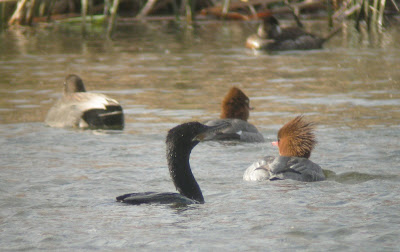 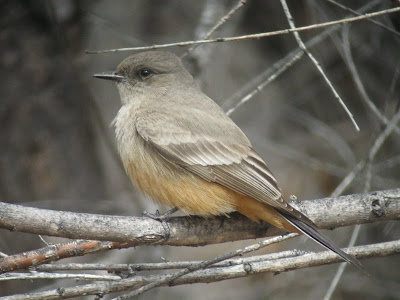 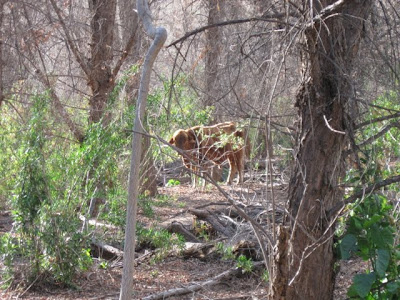 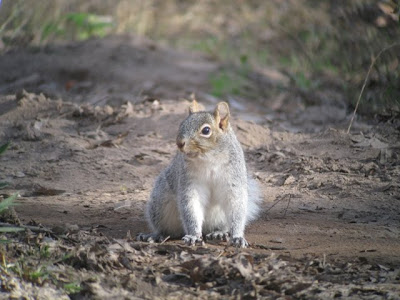 Arizona Gray Squirrel
On my way out to Highway 82, to head north into the town of Patagonia, I was disappointed to see that the road was closed and I was stuck for an indefinite amount of time! A cop on the scene informed me that a serious car accident had occurred. Sure enough I glanced up the road to see two former vehicles that now resembled accordions. An emergency helicopter soon arrived to air-lift a patient to the nearest suitable hospital. Scary stuff. It's difficult to not be shaken up a bit by that sort of dramatic scene. 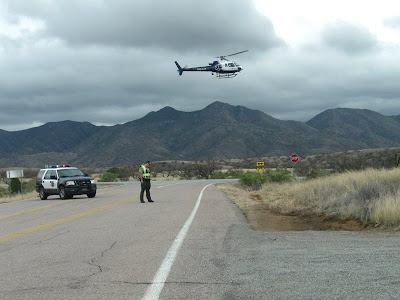 I ended up losing an hour due to the road closure. Could have been worse. I drove [very carefully] into Patagonia for my next stop at the Paton's famous backyard. The original homeowners, the Patons, are no longer living, but their backyard and feeders are still being maintained and are currently open to birders. 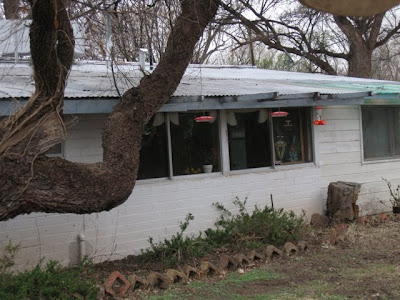 hummer feeders galore
I arrived at the Paton's to threatening skies and gusty winds. After a few minutes the skies opened up for what would be about 90 minutes of steady, sometimes heavy rain. The Paton's yard is best known for its hummingbirds during the warmer months. In mid-February, only one hummer is guaranteed: ANNA'S. I had a male and female Anna's visit the feeders, along with an ACORN WOODPECKER with a sweet tooth. Other birds at the seed feeders included GAMBEL'S QUAIL, INCA DOVE, PINE SISKIN, LESSER GOLDFINCH, and an 'orange' HOUSE FINCH. 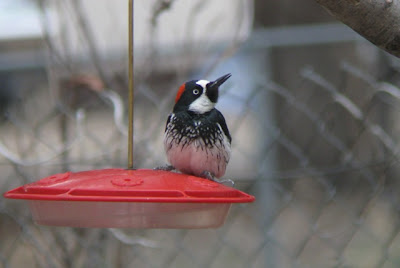 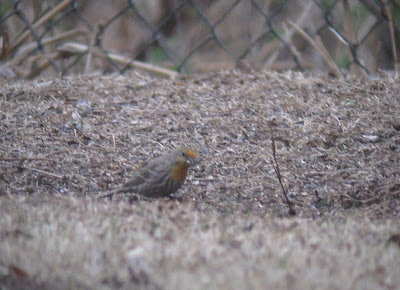 orange House Finch
I left the Paton's after 15 mins of rain and figured it was a good time to pick up some lunch in town, until the rain ended. Once it was down to a drizzle, it was time to head to the San Rafael Grasslands, which was one of the most scenic places on this trip.

In order to reach the grasslands from the west, you must traverse several miles of dirt road through Harshaw Canyon. After the burst of heavy rain the dirt roads turned to mush. Some light snow began to fall. In my sweet front-wheel-drive rental I was starting to have some trouble a few miles short of the grasslands. Still, I was able to make headway sticking to about 10mph.

Just before you reach the grasslands, the road rises slowly for a quarter mile and then abruptly peaks overlooking the grasslands below. As you reach this peak, what you see ahead of you is rather dramatic and beautiful...rolling hills of golden grasses that seem to stretch for miles until they reach the mountains in the distance. 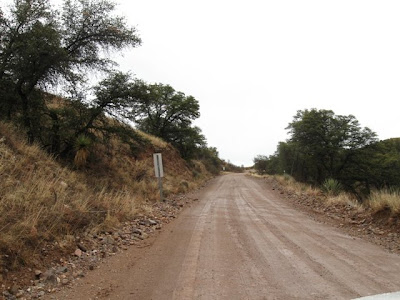 typical habitat of Harshaw Canyon, just before the crest...

...and just over the crest: 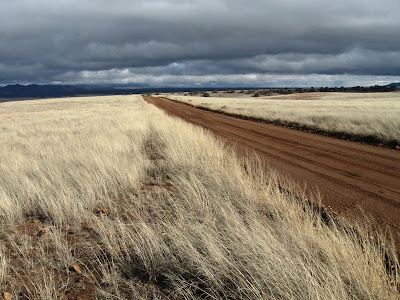 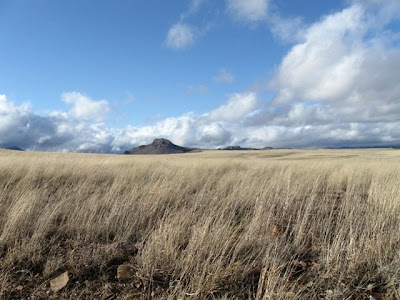 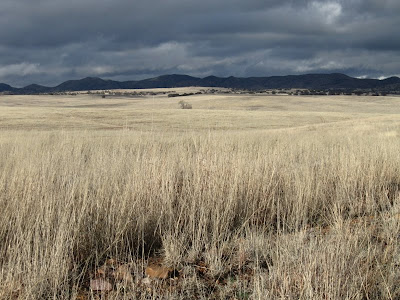 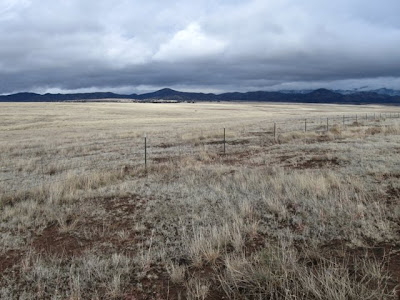 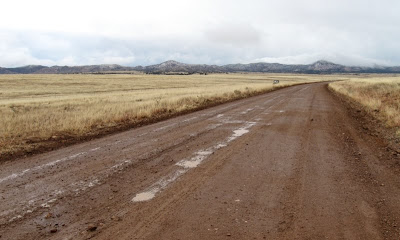 I tried to continue down the muddy road but was flagged down by an oncoming local in a 4WD pickup. He was having a lot of trouble himself, constantly fishtailing and swerving. He told me I wouldn't be able to make it back up the hill if I kept going. I'm sure he was right, so I decided to park along the side of the road and walk as much of the grasslands as I could. I knew this would limit my bird possibilities here, but I really did not want to be stuck in a ditch overnight either.

So I started on foot. A hovering WHITE-TAILED KITE was a nice start, as was my first "LILLIAN'S" EASTERN MEADOWLARK. 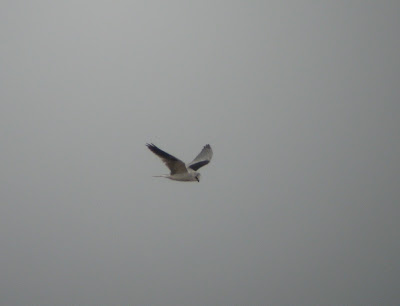 White-tailed Kite
The meadowlark was a real target of mine given the probability of a future split. I was able to study this bird quite well, noting the tail pattern in flight. Later a second one teed-up on a fence and allowed further study. Both birds were calling, and one was singing. Here are photos of both. 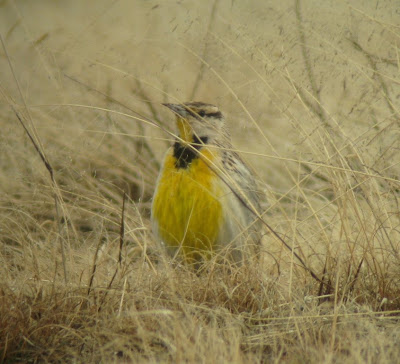 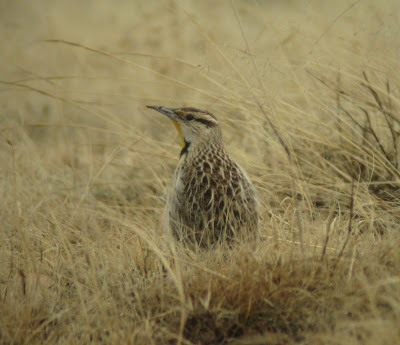 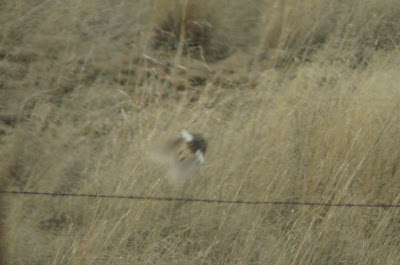 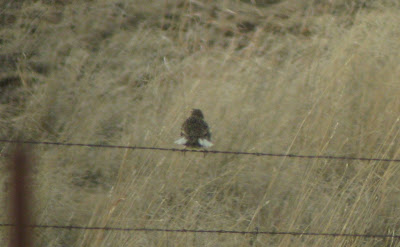 "Lillian's" Eastern Meadowlark
A flock of 13 CHESTNUT-COLLARED LONGSPURS were flying around, allowing me to rule out the possibility of a McCown's being in there. I would dip on this less common longspur. The sparrow numbers were very low, which matched the recent listserv reports. I walked about 2.5 miles each way and only had a total of about 15 SAVANNAH, 2 VESPER, and 3 GRASSHOPPER SPARROWS. The most frustrating moment came when I flushed a weak-flying, streaky, Ammodramus-type thing that dropped back into the grasses, never to be seen again. I had a sinking feeling it was a Baird's Sparrow, another target of mine (and of most birders who visit the grasslands).

As dusk approached, two SHORT-EARED OWLS began to hunt the grasses in the vicinity of the Vaca Corral. By the time I got back to my car the skies were dark and two Border Patrol trucks were flanking my seemingly-abandoned vehicle. The agents were helpful, and they wondered aloud how I would make it through the slick canyon roads. On my way out the roads were even worse. About a half-mile into the trip my rear end fishtailed into a ditch. Luckily I was sticking close to the side of the road with a ditch rather than the one that dropped 30 feet down a steep slope. I was able to maneuver out of the ditch on my own. The rest of the ride out was much less eventful...

I was not able to get back to the grasslands on this trip, which was a real bummer. I wish I had a morning at this awesome place.