March 14, 2010
Glenn Williams, Phil Rusch and I spent a good portion of the day in the New London area in search of storm-blown birds, particularly alcids. The storm of the past two days was intense, packing steady winds of 40-45mph at times with gusts into the 60s! This is nearly Tropical Storm force. Trees fell, thousands lost power, and sadly a couple people actually lost their lives in the destruction.

Our hopes were high for a rarity, but knowing how rare and irregular pelagic birds are in CT waters, we realize that nothing was guaranteed. After wasting the first 30+ minutes of light because the 7:30am ferry was canceled due to high seas, we headed to Harkness State Park in Waterford. Here we didn't have much of note, save for a handful of continuing COMMON EIDER.

Glenn and I decided to head back to the docks for the 11:00am ferry from New London, CT to Orient Point, NY. Our only interesting bird in CT waters was an unidentified large alcid species.

The bird of the day was actually seen while the ferry was docked at Orient Point. Glenn spotted an interesting bird resting on the water at a distance that turned out to be a PARASITIC JAEGER.

Our first views were quite distant and head-on as the bird was on the water. At this point all we could determine was jaeger sp. In early March, Pomarine Jaeger is the most likely jaeger (though still quite rare), so this is what we were expecting. Soon the bird took flight, appearing rather dainty actually, and slowly worked its way closer to us. Despite the wind and fog we enjoyed some really nice views as the bird made short flights right around the docks. It didn't take long to realize we had an out-of-season Parasitic, with the suite of field marks seen...the clinching mark being the thin, pointy central trail feathers well-seen when the bird banked in flight. 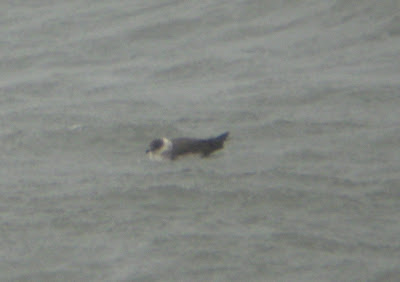 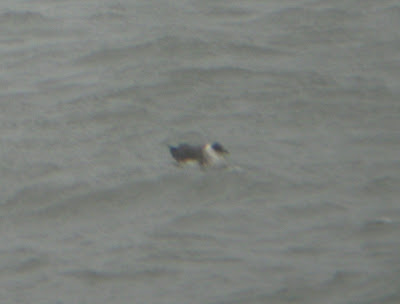 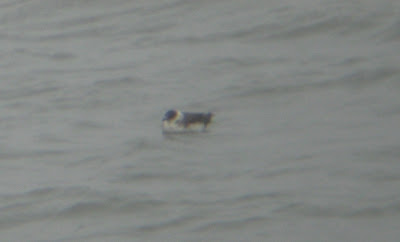 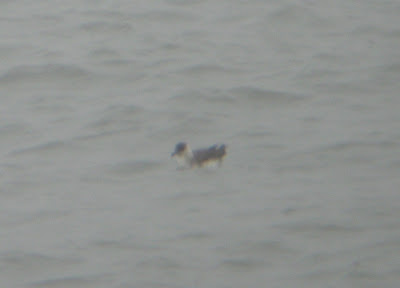 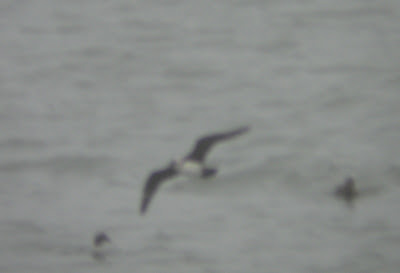 a very blurry shot, but my only one showing structure in flight...one would expect broader wings, a more robust body, and dirtier underparts on a Pomarine 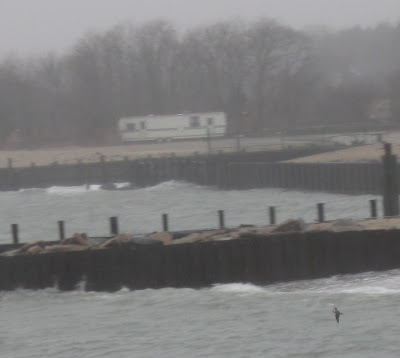 to show how close to land it was, you can see the bird in the bottom-right of this photo